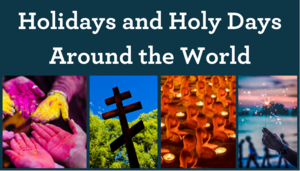 Encyclopaedia Britanica.com states that Jainism is one of the most ancient Indian religions. Jains seek spiritual purity and enlightenment through the tradition of ahimsa, non-violence to all living creatures.
Jainworld.com cites the festival of Paryushan as being the most important festival observed by Jains. This year (2021) Paryushan begins September 4 and ends on September 11 (though dates may vary). Observant Jains fast over these eight days, contemplate scripture, and perform an annual atonement, seeking forgiveness from those against one holds ill-will and forgetting all hatred and spite.

September 5 is celebrated in India as Teachers Day. According to The Indian Express, the recognition of this day began in 1962. “Internationally acclaimed teacher, philosopher par excellence” Sarvepalli Radhakrishnan was the first Vice President of India (1952-62) and second President of India (1962-1967). When he became president, his students wished to honor him by celebrating his September 5 birthday as “Radhakrishnan Day”. President Radhakrishnan declined, suggesting instead that all teachers be honored on September 5. Now “every year, on September 5, classrooms across India fill up with greeting cards, chocolates, flowers and performances as students showcase what their teachers mean to them.”

Monday, September 6 (2021) is Labor Day in the United States. The History.com section on “Labor Day” maintains that at the height of the industrial revolution in the late 19th century the average American worker toiled for 12 hour days, seven days a week. Though not all historians would likely agree on this as an average figure, the average length of the work week and number of hours worked, and working conditions in general, tended to be much worse than for the industrial worker today.
Workers organized into labor unions in an attempt to improve conditions, and also strove for the recognition of a “workingman’s holiday” celebrated the first Monday in September. According to the Library of Congress website, the first of these days was on September 5, 1882, when 10,000 workers in New York City organized the first Labor Day parade. In 1887 Oregon became the first state to recognize the holiday, and in 1894 Congress recognized the first Monday in September as a national holiday.
Once viewed by organized labor not only as a day to celebrate accomplishments but also to air grievances and push for reform, today it is more a day of leisure, “a time for family picnics, sporting events, and summer's last hurrah”. Unless, of course, you’ve already been in school for three weeks!