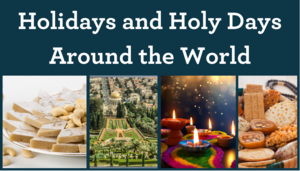 First observed in 2002, and recognized officially by Congress in 2015, Dyslexia Awareness Month in October seeks to raise awareness and share the tools to increase better reading skills.  Dyslexicadvantage.org states that “although 120 years have passed since Pringle Morgan noticed the intelligence and reading discrepancy in a student, we are still only in our infancy in terms of spreading awareness and deepening the understanding of full picture of dyslexic people.”

SpecialOlympics.org notes that “October was first designated as Down Syndrome Awareness Month in the 1980s and has been recognized every October since. It is a time to celebrate people with Down syndrome and make others aware of their abilities and accomplishments.

People with Down syndrome are just like everyone else. They have similar dreams and goals, and they want to have successful careers and families. They can drive, go to work, go to college, go on dates, get married, and contribute to society.”

The Hindu festival of Sharad Navaratri is celebrated from October 7 through 15 this year (2021).  There are various “Navaratri” festivals celebrated at different times of the year in India, but, according to the Navaratri Days website, the Sharad Navaratri festival is the most popular.  The festival celebrates the triumph of good over evil, worshipping a universal mother goddess referred to by different names in different regions of India, such as Durga, Devi or Shakti.  Sharad Navaratri marks the start of fall.

As Meridian School teacher Parvathy Balaji notes: “Each day is dedicated to a particular color and usually we wear the day’s attire matching the color to reflect on what they (the essence of all the legends and mythologies surrounding this festival) symbolize.”

Day 2 White-Eternal and infinite aspect of the human consciousness

The second Monday of October, this year October 11, is Columbus Day.  The first national commemoration of Columbus Day was declared by President Benjamin Harrison in 1892, the 400th anniversary of Columbus’ voyage.  Commemorations of Columbus soon came to be championed by Italian-Americans, who, like many immigrant groups in the United States, faced discrimination.  They rallied around Columbus Day commemorations and parades as a time to showcase the positive contributions of Italians.  The first state to officially observe Columbus day was Colorado, in 1906, and it became a federal holiday in 1934.  The Knights of Columbus, a fraternal organization of American Catholics, proved to be central in the creation of the holiday.

NPR.org notes that, since the 1970s, both scholars and the American public have taken a more critical look at Columbus, with a particular focus upon his treatment of Native Americans he encountered.  Three states with significant Native American populations, Hawaii, Alaska, and South Dakota, do not observe the day at all.  South Dakota celebrates “Native American Day”, Hawaii “Discoverers Day”, and Alaska has a separate “Alaska Day” on October 18.

Muhammad is viewed by Muslims as the last of God’s prophets.  According to the Time and Date website, some Muslims “see the Prophet’s birthday as an event worthy of praise [and] others view the celebration of birthdays as contradictory to Islamic law.” And both groups cite Islamic sacred writings to support their views.

Muhammad was born in Mecca, present-day Saudi Arabia, in 570 CE.

In many Muslim countries this day, “Milad-un-Nabi” or “Mawlid”, is a public holiday celebrated with large parades and the decoration of homes and mosques.  It is not a holiday in Saudi Arabia, however.