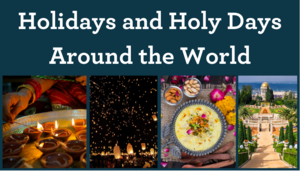 According to SikhWikki, Bandi Chhor Divas (“Prisoner Release Day” in the Punjabi language), is a Sikh commemoration of the day on which the Sikh “Guru Hargobind Sahib was released with 52 Kings from Gwalior Prison.”  This event occurred during the Hindu festival of Diwali, and so these Hindu and Sikh celebrations coincide with one another.

Diwali, or the Festival of Lights, is commemorated on Thursday, November 4 (2021).  This festival can be up to five days in length and is recognized by many Sikhs, Jains, and Buddhists, and as noted on CNN.com is one of the most important Hindu celebrations in India.  The festival celebrates the legend of the return of the Hindu god Rama to his kingdom after a long exile.  Lamps are placed in houses to light his return, houses are thoroughly cleaned, and brightly colored geometric designs known as rangolis are drawn at the entrances to houses and businesses.  It is commonly believed that the Hindu goddess of wealth, Lakshmi, will visit locations that are cleaned, beautifully decorated, and lit.

Daylight Savings Time ends Sunday (November 7 2021).  If you happen to be awake Sunday morning at 2 am, set your clocks back to 1 am and go back to sleep.  Most of us, though, will sleep through this and just enjoy the extra hour of sleep!


According to Bahai.org, “In the middle of the 19th century, [the Bab] announced that he was the bearer of a message destined to transform humanity’s spiritual life. His mission was to prepare the way for the coming of a second Messenger from God, greater than himself, who would usher in an age of peace and justice.”  Baha’u’llah “is the Promised One foretold by the Báb and all of the Divine Messengers of the past. Bahá’u’lláh delivered a new Revelation from God to humanity.”


The Bab and Baha’u’llah are believed by followers of Baha’i to be “twin Manifestations of God.”   In Baha’i belief, Manifestations of God, such as Moses, Abraham, Jesus Christ, Muhammad, Krishna, and Buddha emerge in various periods of history to found the world’s great religious systems.  There are several million followers of the Baha’i faith worldwide, with the greatest concentration being in Asia, Africa, and the Americas.


These two birthdays are among nine holy days of the Baha’i calendar when adherents to Baha’i do no labor.