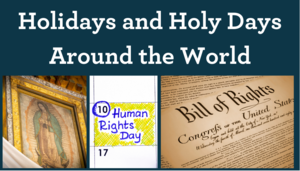 Friday, December 10, is International Human Rights Day, commemorating the adoption of the Universal Declaration of Human Rights by the United Nations in 1948.

Our Lady of Guadalupe Day

Sunday, December 12 (2021), is the Roman Catholic feast day for Our Lady of Guadalupe. Timeanddate.com notes that “this day is particularly special for Americans of Mexican heritage, as it honors the belief that Jesus’ mother Mary, who is Mexico’s patron saint, appeared to a man in Mexico City twice in 1531.”  In addition to her religious importance, the Virgin of Guadalupe is of great cultural importance to Mexicans and people of Mexican heritage.  NBCnews.com states that “Our Lady of Guadalupe is a powerful symbol of devotion, identity, and patriotism. Her image inspires artists, activists, feminists and the faithful.”