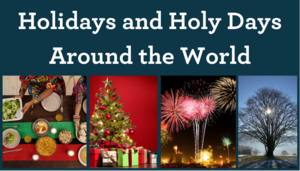 Events for Advent and the approach of Christmas continue, with a variety of observances by Christians around the world. One of these observances is “Las Posadas”, a Mexican commemoration of Christmas from December 16 through 25, which includes processions re-enacting the journey to Jerusalem by Joseph and Mary (the parents to whom Christians believe Jesus Christ was born).

Tuesday, December 21 (2021), will be the shortest day of the year and official start of winter for the northern hemisphere—and the longest day in the year for the southern hemisphere, where this day will be Summer Solstice. Winter Solstice had great significance for agricultural societies, and is a significant part of the reason for the proliferation of festivals and holy days in this period.

The large majority of Christians today celebrate Christmas, but this was not always the case. In the early years of Christianity, Easter was considered to be a major holy period, but the birth of Jesus was not celebrated. According to the History Channel website, this is one reason that 16th century Puritans condemned the celebration. In fact, “from 1659 to 1681, the celebration of Christmas was actually outlawed in Boston.” The New Advent Catholic Encyclopedia states that the first evidence for a Christian commemoration of the birth of Jesus was held by the Egyptian church around 200 CE. There is no direct statement in the Christian Bible on the date of Jesus’ birth—the Egyptian feast commemorated the date in May.
It was in the 4th century that Pope Julius I set December 25 as the celebration of Christ Mass. This is the date celebrated ever since by Christians of the Western tradition, though Christians of the Eastern Orthodox Church tend to follow the Julian calendar and so celebrate Christmas on the date that is January 7 on the Gregorian calendar.

Boxing Day is celebrated on December 26 throughout the British Commonwealth, including in the United Kingdom, Ireland, and Canada. According to an editorial by Claire Suddath on the Time website, there is some dispute about the origins, but they are apparently related to alms-giving to the poor after Christmas.  It has been a national holiday in England, Wales, Ireland, and Canada since 1871, and today festivities generally have less to do with charity than “football (soccer), visits from friends, food and drinking at the pub.”

Kwanzaa is a celebration created in 1966 by Dr. Maulana Karenga, chairman of Black Studies at the University of California at Berkeley, as a way of bringing African Americans together in the wake of riots and discord in the 1960s.  It is intended to be celebrated by those of all faiths.
Kwanzaa, begins on December 26 and ends January 1. The name is derived from a phrase in the east African Swahili language meaning “first fruits”. There are a variety of traditions for celebrating Kwanzaa, but a central tradition revolves around seven candles representing unity, self-determination, collective work and responsibility, purpose, creativity, and faith. A candle is lit each evening, accompanied by a discussion of the associated principle.

Civilizations have been celebrating the start of a new year for as long as they have had calendars.  According to the History channel website, each new year four thousand years ago the Babylonians “celebrated the mythical victory of the…sky god Marduk over the evil sea goddess Tiamat”, and through this celebration symbolically renewed the monarch’s divine right to rule.
There are many different calendars used today, with many different starts to the new year, including multiple Buddhist calendars, the Chinese calendar, the Islamic calendar, the Jewish calendar, and the Gregorian calendar that we use in the United States and that serves as a common calendar in much of the world today.

According to ReligionFacts.org, “sacred days are a high priority in the Sikh faith. The most important holidays in Sikhism are gurpurbs, festivals marking the birthday or martyrdom of a Guru...Most Sikh holidays are celebrated with a ritual 48-hour reading of the entire Guru Granth Sahib, processions... preaching, prayer, and congregational worship.”

January 9 is the Gurpurb of Guru Gobind Singh, the tenth Guru, who was born in 1666.  ReligionFacts states that “Guru Gobind Singh founded the Khalsa and nominated the Guru Granth Sahib, the holy book, as his successor Guru.”

Sikhs.org states that “the word ‘Khalsa’ means ‘pure’...The Khalsa order was initially created on Baisakhi Day March 30 1699, with Guru Gobind Singh baptizing five Sikhs and then in turn asking the five Khalsa's to baptize him. Following this the Guru personally baptized thousands of men and women into the Khalsa order. The Khalsa baptism ceremony is undertaken as part of one’s own personal spiritual evolution when the initiate is ready to fully live up to the high expectations of Guru Gobind Singh. All Sikhs are expected to be Khalsa or be working towards that objective.”
Published December 16, 2021 Print