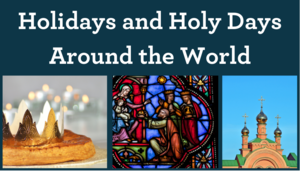 Many Christians celebrate “Epiphany” to commemorate the visit of three wise men (or magi, or kings, depending on the tradition) described in the Christian Bible as visiting the infant Jesus.  Western Christians celebrate Epiphany on January 6.  There are various customs associated with Epiphany.  In France, a Galette des Rois (“Cake of Kings”) is eaten.  A small figure of baby Jesus is hidden inside the cake, and the person who finds this figure in his or her slice of galette is crowned king for the evening!


The January 6 date of Epiphany is also celebrated as Christmas by many Armenian Orthodox Christians.