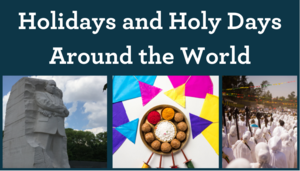 The Romans under Julius Caesar instituted a calendar with 365 days most years, but a 366 day year every fourth year.  This was to prevent the calendar days from drifting out of alignment with the seasons, as astronomers of the time determined that it actually takes 365 and ¼ days for the earth to travel around the sun.  This calendar, known as the Julian Calendar, was used by the Roman Empire and Europeans for over a thousand years.
In fact, rather than taking 365.25 days to circle the sun, the earth actually takes 365.2422 days.  This means that by the middle of the second millennium, the Julian calendar was about 12 days out of alignment with the seasons.  So in 1582 CE, Pope Gregory XIII declared a new calendar adjust for this.
Only adherents to the Roman Catholic Church, and eventually Western European Protestants as well, made this adjustment to the new Gregorian calendar.  Orthodox Christians, such as in eastern Europe and the Middle East, continued to follow the Julian calendar.
Today, most people around the world use the Gregorian Calendar (and historians use the terms “CE”, or “Common Era”, and “BCE”, or “Before Common Era” to reflect this common worldwide usage by Christians and non-Christians alike).  Even many Orthodox Christians no longer follow the Julian Calendar.  But for those who maintain this tradition, because of the now 14 day disparity between the two calendars, the Gregorian date Friday, January 14 (2022) is Orthodox New Year’s Day.

Makar Sankrati is a Hindu harvest festival that, according to New Delhi TV.com “celebrates the sun’s shift into Capricorn (also called Makar in Sanskrit).  About this time the sun also begins transitioning towards the north, and the cold of winter begins to be replaced by warming spring weather.  Makar Sakranti is on Friday, January 14.
“Makar Sankranti is celebrated widely among Hindu devotees.  In Allahabad, thousands gather near the banks of Ganga [the Ganges River]” and priests and devotees sit, meditate, and offer prayers to the Sun God, Surya.   Makar Sankrati coincides with other harvest celebrations held around South Asia, and is an important time of crop harvest.  “In many regions people wake up early, bathe and indulge in kite flying competitions while munching onto some signature delicacies.”
Bahá’í World Religion Day
The third Sunday in January is World Religion Day for the Bahá’í faith.  According to the Bahá’í Faith website, “the day is devoted to proclaiming the oneness of religion and the belief that world religion will unify the peoples of the earth.”  This year Bahá’í World Religion Day falls on January 16 (2022).

Monday, 17 January (2022) is the 15th of Shevat on the Jewish calendar.  Generally called Tu B’shvat, this day represents the beginning of the blooming season for trees in the eastern Mediterranean, and so is known as the “New Years Day” for trees on the Jewish calendar.  The Jewish practice website Chabad.org notes that “We mark the 15th of Shevat by eating fruit, particularly from the kinds that are singled out by the Torah in its praise of the bounty of the Holy Land: grapes, figs, pomegranates, olives and dates. On this day we remember that “man is a tree of the field” (Deuteronomy 20:19), and reflect on the lessons we can derive from our botanical analogue.”

The Martin Luther King Jr. Day of Service is Monday, January 17 (2022), and is a school holiday.  Martin Luther King Jr. is well known for his leadership in the struggle for civil rights for African Americans, including the Montgomery Bus Boycott, his “I Have a Dream” speech at the 1963 March on Washington, and also his fight against poverty.  In 1983 Congress designated a federal holiday in honor of Martin Luther King Jr., and in 1994 the federal holiday was designated a national day of service, with citizens encouraged to “take a day on, not a day off.”  If you are interested in more information on this, please see www.mlkday.gov.

There is much diversity of Buddhist practice around the world, but the two largest divisions of Buddhism are Theravada and Mahayana.  Most use a lunar calendar, and according to Buddhanet, in most countries that practice Theravada Buddhism, “the new year is celebrated for three days from the first full moon day in April …[while in most] Mahayana countries the new year starts the first full moon day in January.”  The first full moon of January is January 18 this year (2022), making this date the beginning of New Year for most Mahayana Buddhists.

Western Christians generally end the Christmas season with Epiphany, and this is often seen as the commemoration of the visit of the magi, or “wise men” to the infant Jesus.  Epiphany occurs on January 6.  In the Eastern Orthodox Church, this date is later, January 19, due to the Julian calendar.  Another difference is that the event is called Theophany, and the focus is upon the baptism of Jesus by John the Baptist.
Another branch of Christianity is the Ethiopian Orthodox Church, which also celebrates the baptism of Jesus on January 19, and the event is known as Timkat. Timkat is commemorated with prayer, fasting, and the sprinkling of holy water over the congregation.
Published January 13, 2022 Print