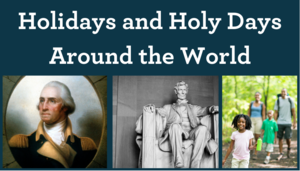 Monday, February 21  is the national holiday officially celebrating the birthday of George Washington.  The “Father of Our Country” was born on February 22, 1732.  According to the United States National Archives website, Washington’s birthday was celebrated long before it officially became a national holiday.  The centennial of Washington’s birth in 1832 saw celebrations across the nation.  But it was not until 1879 that Congress officially added February 22 to the official list of national holidays.  In 1968, Congress passed the Monday Holiday Law to “provide uniform annual observances of certain legal public holidays on Mondays.”  This law established that Washington’s birthday would be celebrated the third Monday of February.  Ironically, this means that the holiday never falls on his actual birthday, February 22, as the third Monday can never be later than February 21.

While the third Monday in February is Washington’s Birthday / Presidents Day in the United States, in many provinces in Canada this holiday is known as “Family Day”.  The intent is to provide workers an opportunity to spend time with their families and a day off in between the Canadian holidays of New Years Day and Good Friday (the Friday before Easter Sunday).