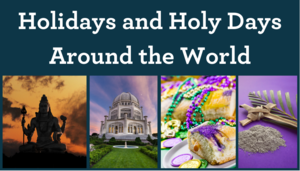 February 25 through March 1 this year are the “intercalary days” of the Baha’i faith.  Unlike the Gregorian calendar, which has 12 months that range in length from 28 to 31 days, the Baha’i calendar has 19 months, each with exactly 19 days.  This totals 361 days of the 365 day solar year.  After the 18th month there are four, or every leap year five, “intercalary” days.  Baha’i Teachings.org notes that these are “days of festivities, gifts, parties, service projects and charitable humanitarian work”.


The intercalary days are followed by the 19th and last month of the Baha’i year, which begins this year on March 2.  The nineteen days of this month are spent fasting.  Much like Muslims during their holy month of Ramadan, the Baha’i faithful do not eat from dawn until dusk throughout this last month and it is a time for meditation, prayer, and spiritual reflection.  The 19 Day Fast ends with the spring equinox, which is the Baha’i  and traditional Persian New Year.

March is National Women’s History Month, a time to commemorate the contributions of women to United States and world history.  March 8 will be International Women’s Day, a day observed internationally since the early twentieth century.

Tuesday, March 1 (2022) is the Hindu celebration of Maha Shivratri.  India Today states that “Shivaratri is an auspicious Hindu festival. Among the 12 Shivratri's celebrated in a year Maha Shivratri is the most important and celebrated one. Shivratri is an amalgamation of two words, Shiv and Ratri, where Shiv means 'Lord Shiva' and Ratri means Night. Together, Shivratri means the night of Lord Shiva. Every year, Mahashivratri is celebrated as the convergence of the forces of Shiva and Shakti. On this day devotees worship Lord Shiva, observe a strict fast and do various religious activities to please Lord Shiva and do Parana on the next day i.e, Chaturdashi.”


At Meridian, fasting students are welcome to go to Content Mastery (CM) if they would prefer not to sit in the cafeteria during lunch.

Lent begins for most western Christians on Wednesday, March 2. For many Christians, including Eastern Orthodox and Roman Catholics, Lent is a period of fasting leading up to one of the most important Christian holy days of Easter.  Mardi Gras (“Fat Tuesday” in French) is a well-known festival, or carnival, held just prior to Lent (March 1), when many Roman Catholics hold a celebration and feast the day before they begin to fast for Lent.  In fact, the word “carnival” comes from the Latin carne vale, or “goodbye meat” (at least according to many—the origin of the term is somewhat in dispute).  The exuberant annual Brazilian festival of Carnival occurs slightly earlier than the French Mardi Gras.  It normally would have begun this week, but due to the Omicron spike has been delayed until late April.


According to the Lemons & Olives Greek cultural website, one interesting Greek tradition related to Lent is the creation of a Lady lent doll.  This was commonly a paper doll or a cookie, with seven legs.  Each leg representing a week of Lent, and each week a leg would be removed. The doll would have no mouth, representing fasting, and her arms would be crossed, representing prayer.  For Eastern Orthodox Christians adhering to their traditional calendar, however, Lent begins on Monday, March 7 (“Clean Monday”).

Wednesday, March 2, was Texas Independence Day.  On this day in 1836, as the siege of the Alamo was underway in San Antonio, delegates at Washington-on-the-Brazos voted to declare independence from Mexico.  Independence was won with Texans’ victory at the Battle of San Jacinto on April 21, beginning the Republic of Texas’ ten year stint as an independent nation.