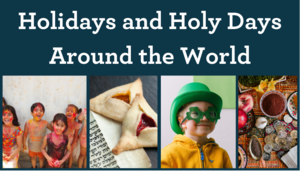 Written and compiled by High School Principal Charles Ryder
Daylight Savings Time Begins
Daylight Savings Time will begin at 2 am this Sunday, March 13 (2022).  So don’t forget to “spring forward” to 3 am!
Purim
The evening of Wednesday, March 16 through the day of Thursday, March 17 (2022) mark the Jewish holy day of Purim.  This day commemorates when, according to the Book of Esther in the Torah, the Jewish population of Persia was targeted for extermination, but was saved when Esther convinced the king of Persia to spare them. This holy day is celebrated by fasting, feasting, and the giving of gifts to charity.
Irish National Day
The importance of St. Patrick’s Day as a commemoration of Ireland and all things green is well known in the United States.  It is “national day” in the Republic of Ireland, celebrating Irish independence, and in Northern Ireland it is a bank holiday.  This year, Irish National Day falls on Thursday, March 17 (2022).
Holi
According to the Society for the Confluence of Festivals in India, Holi, the Hindu new year, begins the evening of March 17 with Holi Dahan, when a large bonfire is lit to help burn away evil spirits.  The festival of Holi continues on March 18 (2022).  According to Encyclopaedia Britanica online, “participants throw coloured water and powders on one another, and, on this one day only, license is given for the usual rankings of caste, gender, status, and age to be reversed. In the streets the celebrations are often marked by ribald language and behaviour, but at its conclusion, when everyone bathes, dons clean white clothes, and visits friends, teachers, and relatives, the ordered patterns of society are reasserted and renewed.”
Hola Mahalla
Beginning on March 18 and ending March 20 (2022) is Hola Mahalla, a festival created by Guru Gobind Singh in response to the Hindu festival of Holi.  SikhiWiki: the Encyclopedia of the Sikhs notes that, unlike the playful Holi, Hola Mahalla is an opportunity for Sikhs to “demonstrate their martial skills in simulated battles.”
Spring Celebrations
Sunday, March 20, marks the official astronomical start of spring, the Vernal Equinox.  It is also central to the celebrations of many religions around the world, including the Shinto Spring Festival in Japan and Nowruz, the start of the Persian New Year.
Published March 10, 2022 Print